For the ‘Pecha kucha’ group tutorial presentation, I’m going to put 20 still images with a short sentence of text that would not take me more than 20 seconds to say verbally should I have the possibility to present in person via powerpoint. I just find this is a clearer and more straightforward way to present than to use video to display 20 still frames, with either a voice over (with my French accent on youtube quality) or subtitles that would either be superimposed on the image and obscure it or rolled down at the bottom at the speed that may not be comfortable for all viewers.

1) My project explores the subjective perception of space via the media of photography and video. My research led me to study very different influences. 2) The Surrealists used photography to hunt for the ‘everyday marvellous’ in the city. They believed that nothing was stranger than reality. 3) A long tradition of American photographers do ‘subjective documentary’, that is, documentary photography that tells more about the photographer’s mindset than the subject. They often photograph backward rural areas or urban decay. 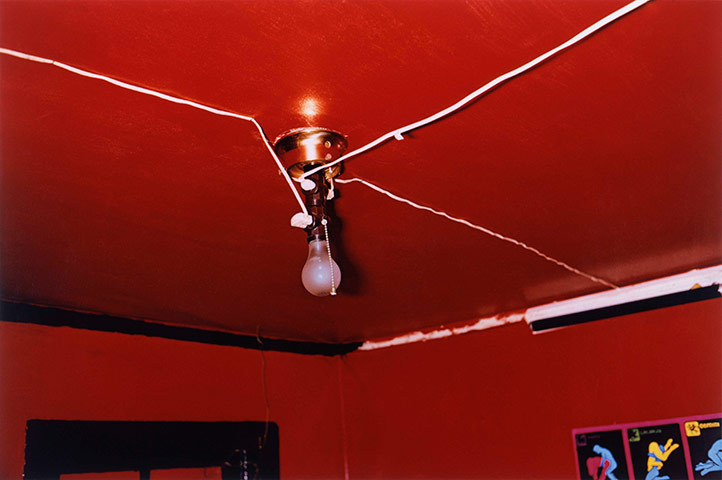 4) I’m especially influenced by Robert Polidori who photographs ‘interiors as metaphors for state of being’. He started with abandoned buildings like me, then branched out to interiors that mirror a country’s view of itself, such as Versailles or Cuban mansions.

5) My research paper explored how all the technical elements of moving image such as light, editing and sound can work together to represent on screen the inner world of a character. I looked at three films: ‘Lost Highway’ by David Lynch, ‘Stalker’ by Andrei Tarkovsky and ‘Last Year in Marienbad’ by Alain Resnais.

6) Outside of mainstream cinema, experimental film-makers take this visual exploration of the human psyche to extremes. The Ukrainian film ‘Las Meninas’ tells the story of the dysfunctional family and the claustrophobic atmosphere of the house and unnerving sound design mirror the characters’ neuroses.

8 ) In ‘Talo’ (The House), Eija-Liisa Ahtila shows a woman suffering from psychosis wandering inside her house. The visuals and sound design reproduce the altered spatio-temporal perception and auditory hallucinations experienced by psychosis patients. This work was based upon discussions with psychosis patients who had overcome their illness, and Ahtila attempts to audio-visually reproduce their experience.

9) In the past month, I furthered this research in a more practical direction by reading cinematography and editing reference books to learn more tricks and try to make my video art more sophisticated. I’m particularly interested in triggers to manipulate the audience’s feelings and reactions.

10) I have a long standing project of documenting ‘Ghost houses’, vernacular houses in Ireland left abandoned when their owners died or emigrated. The owner either had no family, or the heirs had no interest in a small old-fashioned house in the middle of nowhere. 11) The ‘Ghost Houses’ interest me as social documents. The objects in them reflect the power of the Catholic Church in Ireland, and a long history of poverty and hardships. 12) The Ghost Houses are also fascinating as purely aesthetic subjects. The play of light and shadows in them is often beautifully eerie and uncanny juxtaposition of objects are often to be found. 13) Michel Foucault defines ‘Disciplinary Institutions’ as places where people are made useful and obedient through the repression of any deviation from the norm. I documented such places in Ireland, where access to derelict buildings is easier. 14) Magdalene laundries were used to imprison women who were judged in danger of being promiscuous, or not docile enough by their family. Many mentally disabled women were also imprisoned. 15) Insane asylums had long been used to get rid of people judged eccentrics. Husbands also sent their wives there to get rid of them when divorce was not allowed. 16) Workhouses were used to imprisoned poor people in Ireland and the UK. They were made to work for free when they found themselves unable to earn a living (for example when they lost tenancy on their farm). 17) I photographed Woodlawn House, a derelict mansion in Ireland. In the video, I tried to replicate the formally composed long travelling shots from ‘Last year in Marienbad’ because the majestic decor reminded me of the Marienbad Palace if left abandoned. 18) I took pictures of kitsch in my childhood village in search of uncanny juxtapositions, inspired both by the Surrealists and the photographers of backwards America. 19) I took pictures of Raw Art Environment because they physically represent the way people reinvent their surroundings to match their psyche. What photographers and experimental film-maker do metaphorically in their images, marginalised Raw Artists do literally in their home. 20) The last practical work I did was to take pictures and videos in the Opera Garnier in Paris to experiment with the visual possibilities offered by very ornamented décors, inspired by Alain Resnais’ film ‘Last year in Marienbad’ and Robert Polidori’s photographs of Versailles.