After seeing the long corridor shots from “Disciplinary Institutions”, someone at Norwich Arts Centre advised me to check out the work of the Wilson sisters, Jane and Louise. In a 1999 interview, they say their films ‘attempt to describe the psychology of space’. They are interested in places of power in a deserted state.

In “Stasi City” (1997), they explore a building that was first used by the Nazis, then as a stalinist internment camp, and finally as offices by the Stasi, the East German secret police. They were fascinated by ‘Rooms full of files that existed in a limbo; doors that had not been opened since the Wall came down’ and their camera followed long corridors and dwelt on formerly used functional objects.

In “Gamma”, they filmed inside the now dismantled cold war airfield RAF Greenham Common. They staged themselves walking the building in military like clothing, while professing sympathy for the “Greenham women” who organised an anti nuclear weapon protest in 1981.

In 1999, they filmed inside the Houses of Parliament while they were empty.

In “Crawl Space” (1995), they explore “an abandoned house, replete with slamming doors, hints of telekinesis, and amorphous shapes writhing beneath the wallpaper”. (Sadly I could find no images for this one !)

Their latest work “Unfolding the Aryan Papers” (2009) uses footage from a film about nazism that Stanley Kubrick started in 1993 before dropping the project, as well as contemporary images shot by the Wilson sisters of the lead actress Johanna ter Steege recreating some poses from the movie. These contemporary scenes were shot at the semi-abandoned art-deco style Hornsey Town Hall. 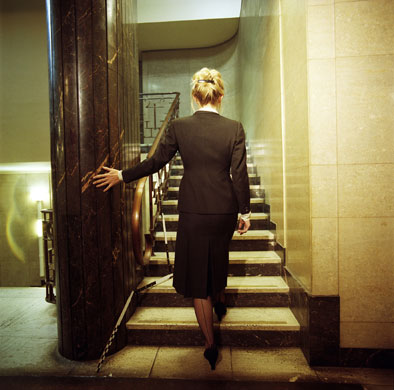